Home » 9 Ways To Avoid Being Scammed While Online Dating

If you or someone you know is giving online dating a try during this current period of isolation, then listen up! These days it’s often hard to tell the difference between the profiles of men and women who want a real romance and the ones who are ‘fake news’ on a dating site.

In all fairness, I know a handful of people who met online, got married and have healthy relationships. But more often than not, singles are being fed pretend profiles — or worse — getting scammed.

More often than not, the person looking for love online will get a message from a single man or woman who is super attractive. He or she may look too good to be true, and they will play into your insecurities or loneliness. Or immediately flatter you with words of affection when they don’t even know you yet.

Typically, these scammers build trust by writing long messages spanning weeks or months, crafting a whole fake persona for their victims. That big investment gives victims a false sense that the relationship must be real. Sometimes the scammer will then go on to ask for money — he or she will suddenly need funds for an emergency or tragedy and must have it right away. And this is where many people feel sorry for the scammer and send them money without a second thought, potentially losing their entire life savings in the process.

I think it’s safe to say that nobody wants to be scammed. Especially when you’re looking for love. So how do you know who is real online and who’s not? Here are nine ways to avoid online dating scams:

01. LOOK OUT FOR FALSE OCCUPATIONS

Scammers don’t like to give the impression that they’re a nobody. So one the first things they tend to do is claim to have a fantastic job. These usually include things like:

02. BE WARY OF ANYONE WHO SAYS THEY LIVE OR WORK OUTSIDE OF THE COUNTRY

Not everyone will be lying when they say they live or work outside of the country, but it’s important to know that romance scams are usually the speciality of international scam artists. Familiarise yourself with the list of false occupations above that scammers favour, and be very wary of anyone who claims to work as any of them overseas. Scammers who say they live in another country may also ask you for money so they can fly out and visit you at some point. They will usually send you screenshots of super expensive flights, but never actually book them once you’ve sent them the money.

03. IF THEY APPEAR TO BE TOO GOOD TO BE TRUE, THEY PROBABLY ARE

He’s self-employed, filthy rich, and has a Master’s degree or higher. Plus, he’s madly in love with you and may refer to you as his soulmate straight away. He’s so thoughtful in his understanding of you and super responsive to your messages. Finally, he appears to be totally smitten with you, despite never meeting you. As nice as it is to think the guy you met online is everything you’ve ever wanted (and more) these are all red flags that something nasty is about to happen. Just be careful, and don’t trust anything anyone says until you’ve had the chance to check it out.

04. AVOID COMMUNICATING OUTSIDE OF THE DATING SITE

He may want to email you directly rather than on the dating site or want to text and talk to you via an international app like WhatsApp. This may well be because he’s using a fake name and email address and it will make it harder to catch him once he’s scammed you! I would always recommend using a well-known dating service such as Match Me Happy, which is free to join, but has a solid infrastructure and AI technology to keep people safe from nasty scammers like this.

05. DON’T LISTEN TO THEIR SOB STORIES

Scammers always tend to come armed with a sob story to make you feel sorry for them and send them money. Examples of this usually include things like his computer has crashed and died, he has a close family member in need of help, or he’s had a tragic accident outside of the country and he doesn’t have access to any cash. Some scammers even go as far as telling their victims that they’ve just lost their wife and can’t afford to pay for a funeral. It makes me sick just thinking about it!

06. LOOK OUT FOR PEOPLE SUGGESTING YOU KEEP YOUR ‘RELATIONSHIP’ A SECRET

If the guy or girl you’re chatting to online says no one could ever understand the extraordinary love you two share so it’s probably best not to talk about it, then you’re almost definitely being scammed! They say things like this to you so your family and friends won’t get involved and stop the scam. In my opinion, it’s always best to talk to people close to you who you trust and ask what they think of the online profile you are hesitant about or may think is sketchy.

07. DON’T GIVE OUT ANY FINANCIAL INFORMATION

These cons are so clever that they can make even this insane request seem entirely reasonable. If he’s playing you for a big amount of money, he may even offer to give you some cash first to prove he is not a scammer and get your information. Asking for your financial information is a major red flag, and I’d suggest reporting them to the dating site you’re using as soon as they ask you for any sort of financial information. This way you might prevent someone else from getting hurt in the future. Once you’ve reported him, block him and bow out immediately.

08. DON’T SEND ANY MONEY OR HELP HIM MOVE MONEY

Because he needs help with the sob story you learned about earlier, the scammer may ask you to give him money directly. Once your money is sent overseas, it is usually unrecoverable. If anyone asks you to send them money online, make sure to report, block and head for the hills!

If you suspect an online dating scam, conduct a search. Copy the photos from his profile and run them through a reverse-image search engine, such as Google Images. If the images come up associated with a person who has another name or lives in a different city, you may have good reason to suspect they were stolen. And if you’ve been communicating with someone by email, check their address at a site such as Romance Scams, which compiles lists of email addresses belonging to known scammers. The website Scamalytics maintains a blacklist of scammers who use false pictures too.

And there you have it, my top 9 tips to avoid being scammed while online dating. If you’re worried that you may be being catfished and have no one to share your concerns with, please get in touch. I’d be more than happy to help. 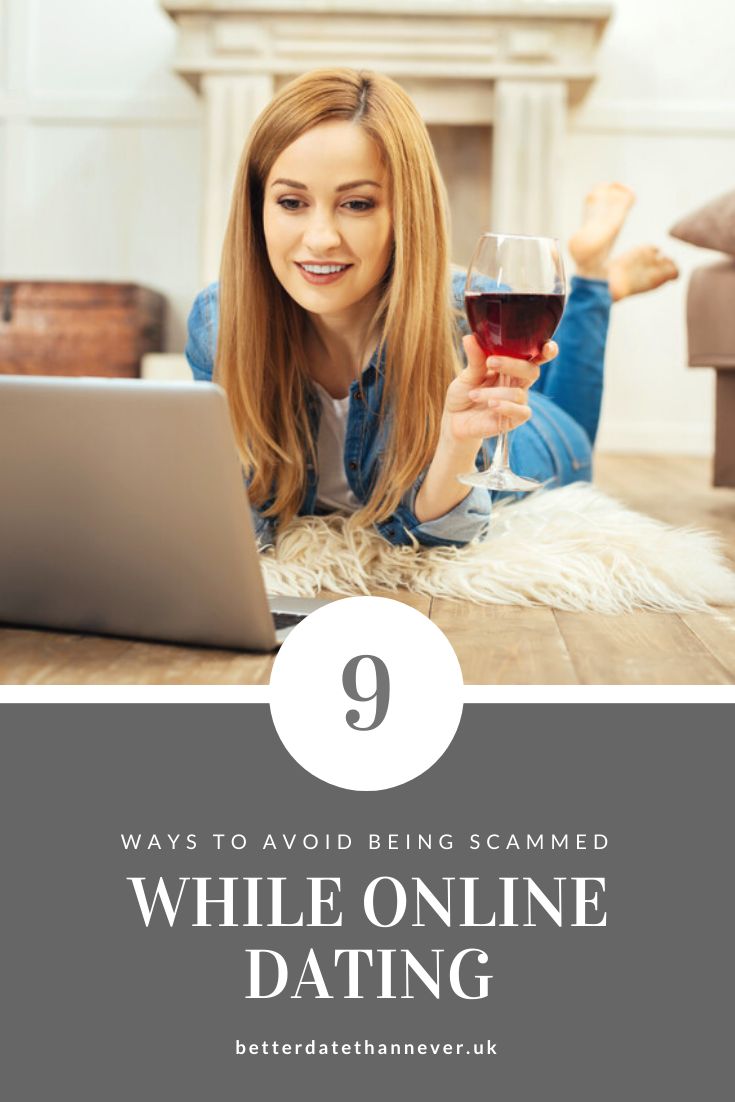